Anatolian Shepherd (Anadolu Coban Kopegi): The Anatolian Shepherd Dog is a remarkable shepherd’s guard dog of ancient lineage. It is a large, formidable working dog with a self-sufficient temperament. Such dogs are found throughout the Anatolian Plateau of Turkey (Turkish: Türkiye). Historically since Babylonian times there was a breed of large, strong dogs. They were variously employed as war dogs and for hunting huge game such as lions and horses. Some spectacular examples can be seen on the very well preserved relieves in the Assyrian Rooms of the British Museum, London. 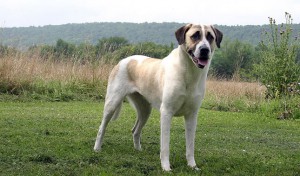 The breed has evolved over the ages and is now well adapted to suit a specific set of circumstances. Of these the most formative are the climate, the peoples’ lifestyle and the job assigned to the dogs. The climate of the Central Anatolian Plateau of Turkey (Turkish: Türkiye) is continental. The average elevation is 3000ft (1000 meters) above sea level, surrounded via mountains 5-10,000ft (1600-3000 meters) high; the summers are hot and very dry; in winter there is prolonged snow and the temperature falls well below freezing. The dogs stay out all the time – whatever the weather may be. They are not confined to the Plateau alone and imposing specimens can be found wherever the population relies wholly on grazing. Settled, semi settled and wholly nomadic pastoralists and farmers sparsely populate the Anatolian Plateau. The divisions between these people may become somewhat blurred due to the variability of the rainfall. In fine years bumper crops of wheat are grown and there are storage problems. In dry years the whole population of an area falls back once more on their flocks for sustenance. These flocks are predominantly made up of tall rangy fat-tailed sheep, with some silky haired goats; also camels may be present. Many people own donkeys as well.

Grazing soon exhausts the sparse natural vegetation of the steppe, so the flocks travel great distances at times. Often they have to seek higher and even higher ground in summer, till the early snows drive them down again. In this lonely roaming life the dogs are often the shepherds only companions for long periods, with not a tree or rock for shelter in all weathers. The shepherds’ can be seen standing leaning on their crooks wrapped up in fabulous thick wool felt cloaks that keep out heat and cold, dust and rain. Turkish sheep bunch together naturally and have tiny if any incli 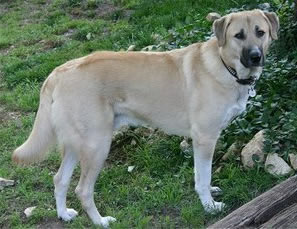 nation to scatter, an adaptation perhaps to the various predators about. These include wolves, eagles and the very common jackals, and of course sheep-stealers and cattle-thieves. There is also a large species of wild cat in the southern mountains called the Taurus Lion. The dogs do not herd the sheep but patrol around them, often seeking higher ground to get a better view, and a breeze. The sheep tend to follow the shepherd and the dogs patrol the ground ahead, checking out every bush and irregularity of the terrain for potential trouble. Should they notice anything, even a moving car, they will silently at first, split up and converge upon it from all sides at great speed. These ambush tactics are inborn and quite fascinating to watch, an unforgettable experience to be so treated.

This description makes it clear the dogs must be strong and hardy, not easily tired and at times are called upon to be very brave. They need their weatherproof coats and can exist on very tiny food as adults. They are also great fun due to their lively intelligent disposition, acting as partners to man. The shepherds value them highly and recount with pride how large, faithful and indomitable they are.

Anatolian Shepherd Dogs are naturally very watchful, always ready to investigate anything unusual. They have remarkable eye-sight, an acute sense of smell and very fine hearing. Their memory is also excellent. Their natural inclination is to get up at intervals, especially at night and patrol the area, bedding down in a different spot each time. This keeps their coats remarkably clean, and parasite free.

In Turkey (Turkish: Türkiye) there are no fences so the numerous dogs have to respect little children, young lambs and other forms of domestic life. But when strangers arrive, fierce barking breaks out and the visitor’s stand rooted to the ground until someone informs the dogs it is all right. The dogs are also called Lion Dogs (Aslan Kopek) and Wolf Dog (Kurt Kopek) but the universal name for these dogs is ‘Coban Kopegi’ (Shepherd Dog). The tawny coat is more prominent, but via no means universal. Splashes of white particularly on the legs are common, as also are dogs with coats of white with brown/black patches; even wholly white and wholly black specimens are seen. The various shades of dun, from cream to red-brown, blend well with the terrain.

There are many factors, which combine to keep this ancient and fascinating breed from undesirable change. These include unrelated breeding, correct feeding, fitness for their work and selection at all ages. Very few bitches are normally kept in Turkey (Turkish: Türkiye), usually enough to provide replacements. There is always a very well defined ‘pecking order’ in the pack of male dogs, which can number many in a large village. Only the top dogs, the pack leaders, sire puppies. Thus most dogs, even quite fine specimens, never sire anything at all; and any really miserable specimens get no look-in at all. In this way weakness of any sort is continuously being eliminated. The Turks values size in their dogs and normally keep only 1 or 2 puppies per litter, to maximize growth, which is exponential at first. The largest puppy is kept in all cases, irrespective of color or coat, which may differ considerably amongst the individuals within a litter. Splashes of white that may or may not later disappear are common; even wholly white or entirely black puppies are born from time to time. Puppies born quite black often turn into the usual dun later and can be indistinguishable from its littermates that were born ‘yellow’. Coat color changes can sometimes continue occurring until the animal is mature. The Turks say that dogs take 4 years to mature fully and it increasingly seems that this is so. Inbreeding also seems to reduce stature and make the temperament less sweet.

It is fervently hoped that these dogs never find their way to ‘puppy farms’ as they would suffer in such places more than most breeds do. It is of course realized that few, if any owners can provide the Anatolian Shepherd Dog with its natural habitat in the UK. Nevertheless it is hoped that the dogs will be kept, fed and reared in conditions as near to natural as possible so that they can retain the marvelous qualities and appearance which can still be seen in Turkey (Turkish: Türkiye) today. 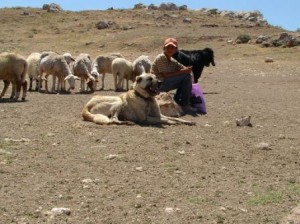 When you study history of Kangal Dogs, you could not find any documents about them. There are several rumors about Kangal dogs; According to 1 rumor, the dog was derived from lion and tiger during Assyrian and Babillonian periods and were petted in order to provide protection against wild animals and use in wars and were grown up with great care, just like any Anatolian Shepherd Dog.

According to another rumor, the first Kangal was given to the Ottoman Sultan (Yavuz Sultan Selim or Murat IV) via an Indian Maharajah. The dog fought with the lion in the palace and killed it. Thus the sultan was considerably interested in it. When the army went for an attack and arrived in Kangal Deliktas nearby Sivas, the dog got lost, and that the species of dog in Kangal was derived from this lost dog.

Evliya Celebi mentions this dog describing it as strong as a lion in his inscription in the 17th century. It is believed that the dog was brought to Anatolia (Turkish:Anadolu) by the Ottomans and the Shepherd species in Europe were derived from this species when Ottomans invaded Europe. From Ottoman archives, 1 can find the dog mentioned as it was grown up with great care.

The long lifespan of Kangal is because of its being loyal friend to farmers breeding sheep and being the best dog species in fighting with wolves. Kangal dogs can do their duties under the harshest climatic and working conditions, and they don’t recognize the meaning of fear. Care and feeding conditions are easier and simpler. 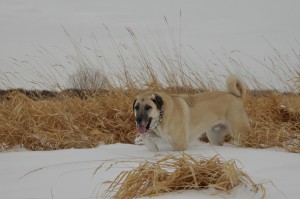 Kangal Shepherd dogs have a fair reputation in Turkey (Turkish: Türkiye) and around the world. Particularly in England and in the USA several associations have been established via lovers of this species, and several competitions have been held. Unfortunately during people abroad have shown great interest to Kangal species, Turkey (Turkish: Türkiye) has not done the same until lately.

Kangal Shepherd dogs are very brave, quick and agile. They are quite fine to women and children and quite a dissuasive weapon against bad people as they are intelligent and strong insights and are faithful to their owners. When they are scolded via their owners they are ashamed like a child, look so sad and innocent for begging their owners to forgive their mistake. They display their feelings not only through position, behaviors, mimics and gestures but also in various tones of barking.

Kangal dogs are so loyal to their duties that it is said that they wait for days to keep the sheep leaving the herd without having food and water. Despite lasting for centuries, they have not

lost anything from their blood qualifications or high spirit. They are highly blood noble. They never mate with any other dog species even when they are free. They were started to be trained for military and law enforcement use in 1975 and it has been proven that they have better and more skills than other dog species being trained for military missions for centuries.

The characteristics of a fine Kangal dog 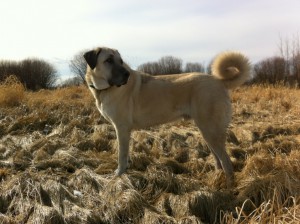 How can you have one? You can purchase young Kangal dogs fed and grown up under control of vet with full vaccination in production farm under control of Union of Taking Services to Rural Areas (Villages) of Kangal Governor Office – Sivas. Please be noted that there are strict rules for foreigners taking Kangal’s out of the country, a special permission has to be taken.”