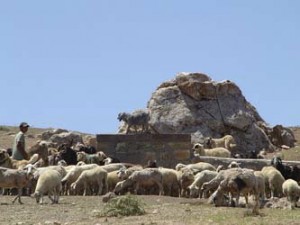 Sheep producers losing lambs to predators or dogs find themselves seeking help to control or eliminate these losses. Several options are available to producers. Various kinds of electric and non-electric fences, traps to catch the predators, scare devices, cultural methods of penning sheep such as housing at night, using vapor lights, and guardian dogs are options quite successful in decreasing losses for many sheep producers.
Guardian dogs are receiving a lot of attention for controlling predators. Five years of research with 60 livestock guardian dogs at the U.S. Sheep Experiment Station in Dubois, Idaho, concluded that the success rate of using guard dogs was over 60% when trained properly and only 10% of the dogs were rated as poor. Hampshire College New England Farm in Amherst, Mass., also reported excellent results of sheep protection with guardian dogs.
Guard dogs are not a cure-all for predator problems. Guard dogs are viewed as a first line of defense against predation in many types pf operations but they need to be supplemented by other control methods. Properly integrating a puppy or dog into a sheep operation takes time, persistence, and patience. Some dogs are failures, but another dog can replace one that has failed and the second dog can be quite successful. Some guard dogs have killed sheep in the flock they are supposedly guarding. In early training, signs of rough handling and over-aggression should be handled with stern discipline.

How do guard dogs protect sheep?

Guard dogs protect sheep by patrolling, barking, scent-marking, and pursuing a predator when the sheep are threatened. A sheep producer should investigate the concept of using a guardian dog before investing in a puppy. A guard dog must form a bond with the sheep and protect them from predators. It is very important to incorporate a guard dog into the total management plan. A producer must consider other dogs on the premise and determine how the guardian dog will relate to these dogs. Some producers are forced to take the guard dog away from the sheep in order to work the sheep with working dogs.

The dog may be one of several breeds or a mixture of breeds. The most common breeds of guard dogs in the U.S. are the Great Pyrenees, Komondor, Anatolian Shepherd, Akbash Dog, Maremma, Kuvasz, and Sharplaninac. These dogs generally command good prices, however, the loss of a few lambs will soon pay for one. Mixed dogs were used in experimental work and were quite effective depending on how they are reared and the kind of temperament they exhibit. A pup, born of a proven sire and dam and raised among sheep will probably develop into a good guard dog if properly bonded with the flock.
A puppy raised in a kennel may have difficulty bonding to sheep, especially if over six to eight weeks of age. Choose a puppy from a line that exhibits traits complimentary to your needs. Avoid pups from overly shy or aggressive parents. Investigate the health status of the parents and look for hip dysplasia, a joint problem common to many large breeds of dogs. Consider neutering the pup to prevent problems due to heat cycles in females and males seeking females in heat. Neutering of males or females does not diminish their guarding capability.

Raising and integrating the puppy in a sheep operation

The puppy should be placed with the sheep and treated as a working dog, not a pet. Place the puppy with some lambs to avoid injury that may result from older aggressive ewes. The puppy must develop a bond with the lambs. The older sheep must be introduced gradually to the puppy. Ewes not accustomed to a guard dog may view the pup as an enemy. Over time, the sheep flock will become accustomed to the presence of the guard dog and they will tend to ignore the dog’s presence.
Feed the pup in the sheep barn when the sheep are fed. Correct the pup for inappropriate behavior such as chasing or biting the sheep and praise the pup for good behavior.

Age at bonding pup to sheep

Failure to stay with the sheep requires correction. Correct the pup for coming to the house by immediately taking it back to the sheep. A sensitive pup will respond to a verbal reprimand while a stubborn “hardheaded”. pup may need a physical correction. Chaining the dog with the sheep at night and releasing it during the day may achieve positive results. Introduce the new pup to its new boundaries on a leash and do it several times the first week. Patrolling and attentiveness to sheep will increase and develop over time. Regardless of training of some pups, a small percentage never strongly bond to sheep.

Playing with the sheep

A certain amount of licking, pawing, chasing and nipping can be expected with some puppies. Boredom contributes to playful activities between puppies and the sheep. The problem can be minimized by moving the pup to a larger area, or in some way changing the pup’s environment. Closely supervise a new pup and this will eliminate the formation of bad habits. Play behavior decreases with age.

The time required for the sheep to accept the pup will vary with the time of year it is placed. Lambing time is one time when the ewes will be protective of their young lambs. It generally takes several days to a few weeks for the sheep to accept the pup. Sheep accustomed to a guard dog are easily moved by herding dogs but the guard dog may have to be chained or placed away from the sheep.

A guardian pup is a valuable animal. They must be protected from accidents by moving vehicles, being mistaken for a predator by neighbors, shootings and trappings. A patrolling guard dog may easily be mistaken for an intruder. Notify your neighbors that you have purchased a guard dog.
Guard dogs become ill the same as any livestock. Be aware of a loss of appetite, diarrhea or a change in behavior. Consult your veterinarian and get proper immunization and deworming for your pup.

Guard dogs have become very effective in controlling predators and dogs on many Missouri sheep farms. Guard dogs are not 100% effective; there is variation across and within breeds of dogs. Handling may be one cause of failure. Guard dogs must be properly trained to be successful. Patience, perseverance and discipline are required to teach a guard dog to bond and accept the responsibility of guarding a flock of sheep.

Lincoln University at Jefkrson C:ity, University of Missouri, and the U.S. Department of Agriculture